The Islamic Society of Boston (ISB) has announced the appointment of a new “associate imam”, Abdul-Malik Merchant. The ISB describes Merchant as a convert and former student of Umm al-Qura University in Saudi Arabia.

For those attending one of the largest mosques on the Eastern Seaboard, what can Boston Muslims expect to be taught by Merchant? 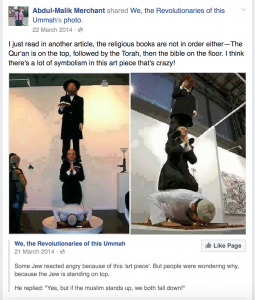 Merchant appears to harbor a particularly strong dislike of Jews. In a Facebook post discussing Jewish “plotting”, he published text claiming: “The Jews wanted to kill Jesus the son of Mary (peace be upon him) because there [sic] normal way or tradition was to kill the prophets.”

On a blog run by Merchant, a variety of anti-Semitic religious scripture is quoted: “Oh assembly of Jews! You are the most digusting of the creation to me. You killed the prophets of Allaah…”

Elsewhere, readers are told: ““It is impermissible for the muslim, male or female, to assist the Christians, Jews, or other than them from the disbelievers in their holidays. … The Messenger, may peace and blessings be upon him, warned us from resembling and acting like them.”

Translation work carried out by Merchant warns that: “envy is form [sic] the manners of the Jews.”

Merchant also circulates text telling his followers to be “beware of the charms of women”, whom he claims are to blame for the fall of “Banu Israel” [the Jews]:

“Banu Israel … were tried with the women, then were misguided and guided others, and I seek refuge in Allah. For this reason, you find our enemies and the enemies of our religion (enemies of the Shari’ah [law] of Allah (Mighty and Majestic)) focusing today on the issue of the women, displaying them, mixing them with men, and evolving them with men in work. Until the point where people are like donkeys, not focusing on anything except their stomachs and private parts, and I seek refuge in Allah.”

“In addition, our enemies, enemies of Allah’s religion and Shari’ah, and enemies of shyness want to involve the woman in male jobs; until the point where the suffocate the men, causing the youth to complain in the markets because they don’t have jobs, and from this freeness derives great evils and tremendous trials. Because, the youth, freeness, and music are from the greatest of destruction.”

“… Verily, it came in the authentic Hadeeth, “I have not left a trial more harmful on the man than the woman.”

When asked about the necessity of a Muslim women wearing a hijab so to cover her head, Merchant responds by citing a ruling of a religious scholar:

As for the second issue, it is leaving off the Hijab as she mentioned about herself. She asked will she be punished with the Hellfire in the afterlife for that. The answer is that whoever disobeys Allah (‘azza wa jal), with an disobedience that is not nullified by righteous actions, is truly in danger. If the transgression is Kufr (disbelief) or Shirk (associating partners with Allah), which removes you from the religion, then the punishment is warranted for whoever does so. Allah said, “Indeed, he who associates others with Allah – Allah has forbidden Paradise for him, and his abode will be the Fire. And there are not for the wrongdoers any helpers.”

Merchant displays hostility towards homosexuals as well. He promotes articles published by Christian fundamentalist groups claiming that homosexuality is a choice, and often the product of “exposure to pornography or sexual abuse.” 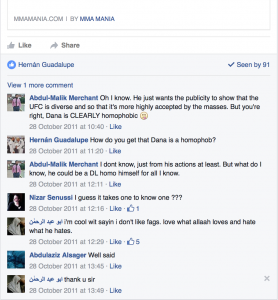 In another Facebook post in which Merchant expresses support for keeping “gays” out of fighting sports, Merchant ‘likes’ a comment stating: “i’m cool wit sayin i don’t like fags. love what allaah loves and hate what he hates.”

On the blog Merchant jointly manages, it is written: “With great sadness, homosexuality is something that is becoming prevalent in the societies where Muslims live throughout the world. … May Allaah protect the Muslims from all evil and wicked affairs.”

Elsewhere, Merchant publishes text that refers to “effeminate men” as “evil things”, and “according to the Shari’ah they are a considered dirty and unclean.” Merchant goes on to add that Muslim men should be aware that it is “easy [to fall into] the paths of evil with [an effeminate man] than with a woman,” and that Muslim men must only look with “desire” at their female spouse or slaves.

Merchant presumably learned many of these opinions from his time as a student at the Umm al-Qura University in Saudi Arabia. The Dean of Islamic Studies at Umm al-Qura is Safar al-Hawali, who claims that there is a Western conspiracy to occupy Muslim lands and destroy Islam. “The real enemy is not Iraq,” al-Hawali claims, “It is the West.”

Merchant’s duties at his new job at the ISB include providing a “daily spiritual presence in lives of community members”, “convert care” and “Daily interfaith events”.

It appears that Muslims who attend the ISB will be taught unbridled anti-semitism, misogyny and homophobia. When will our politicians, media, as well as Jewish, Christian and moderate Muslims take a stand against this radical institution?

For more information on the long history of the ISB’s extremism and terrorism links, read our report here