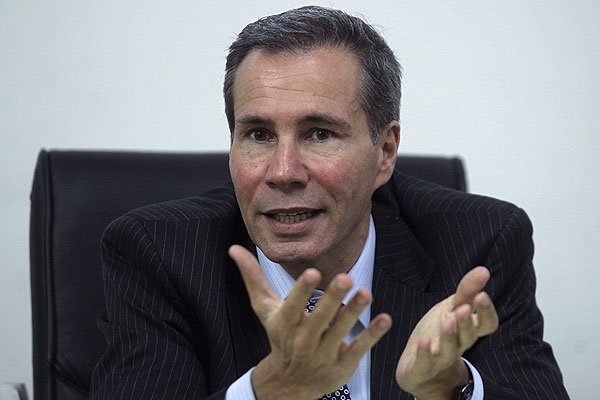 January 19, 2015
Alberto Nisman was investigating the 1994 bombing of a Jewish center in Buenos Aires that killed 85 people. On Wednesday, he accused the president of Argentina, Cristina Fernández de Kirchner, of involvement in a plot to cover up Iran’s alleged role in the bombing. Today, Mr Nisman, 51, was found dead by his mother in the bathroom of his home.

In 2009, Charles Jacobs spent several hours with Alberto, interviewing him about the case. His subsequent report now serves as a tragic backgrounder.
Cover-up in Argentina

We Jews of Boston, like the Jews of Buenos Aires, number about 200,000. Some 15 years ago, an Islamic suicide bomber blew up their headquarters building, killing 86 people, wounding hundreds. I recently returned from Argentina, where I toured, did some research and pondered our Jewish fates.

With the help in Boston of Argentine Jewish leader Alberto Limonic, I was invited to interview the heads of the Jewish community in their newly constructed offices and also to meet with Alberto Nisman, Argentina’s chief prosecutor in charge of investigating the bombing. By a stroke of luck, I also met Gustavo Perednik, an Israeli scholar visiting his native Argentina, who has just published a book on the attack. I wish all of Boston Jewry could have heard what was said at these three meetings.

The visit to the AMIA (Asociación Mutual Israelita Argentina) building was emotional. The new structure – built where the destroyed building stood (in order to make a point about Jewish permanence) – is set back from the street some 30 yards. It is protected from another possible bomb by a wall, the heaviest security doors I’ve ever encountered and constant policing. Here, Jews had been savagely murdered. No one has forgotten.

My wife and I were escorted by Ana Weinstein, the Jewish community’s federation director. On July 18, 1994, Weinstein escaped death by minutes, only because she rushed to a back office to retrieve notes for a meeting just before the blast. Her secretary, waiting for her, was killed. An amazingly strong, learned and graceful woman, Weinstein told us about the attack, its victims and survivors – many of whom were not Jews, but passers-by.

We were joined by Dr. Julio Schlosser, AMIA’s secretary general, who told of the heavy “security tax” imposed by terrorism – most policing of Jewish buildings is conducted and paid for by the Jews themselves – and of the community’s need to feed and support the many Jews hurt by Argentina’s long, long recession.

The next day, I interviewed Alberto Nisman in his offices. We spoke in Spanish. He is a historic figure, but I didn’t realize the full extent of what he had accomplished until I spoke to Perednik.

As the Israeli author tells it, Nisman, a lawyer and prosecutor, was picked as special investigator in 1997 to rubber stamp the government’s false account of the AMIA attack. The Argentine regime knew soon after the attack that Iran engineered the plot, but according to Perednik’s research, it could not accuse Teheran because Iran had replaced Russia as Argentina’s chief market for grain and meat. The regime was also concerned that Iran would retaliate with yet another strike if charged with the crime.

But Nisman surprised everyone. With dozens of investigators, an extraordinarily creative approach and an iron will, he uncovered the government hoax and convinced Interpol of his main finding: that the bombing of the Jewish headquarters was not – as Buenos Aires was telling the world – a plot by a few anti-Semitic policemen and low-level Iranian dissidents. According to Nisman, the attack was hatched, planned and financed by senior officials of the Iranian government, and executed by Teheran’s terror arm, Hezbollah. Nisman even specified the meeting where the bomb plot was hatched: Aug. 14, 1993, in the Iranian city of Mashad. Argentina apologized to The Inter-American Commission on Human Rights for its role in the cover-up. Nisman, who has since been living under death threats, lives with bodyguards.

Though Nisman’s 800-plus page report is public, much more public education needs to be done. The alleged culprits – some holding senior positions in Iran’s government – are still free; and the growing Islamist penetration into South America (thank you, Hugo Chaves), which threatens all Jews in the Western Hemisphere, receives little public attention. Perednik – a scholar and award-winning author of 10 books – published his account of Nisman’s feat through the largest editorial house in South America, El Planeta. He told me he wrote “Matar, Sin Que Se Note” (“To Kill Without a Trace”) as a novel because he wanted a large, popular audience. Its protagonists include heads of state, Argentineans, Israelis and Iranians, as well as the mothers of the children who died in their arms as they casually passed by the AMIA on that fateful day.

In the novel’s most dramatic scene, based on a real-life event, Nisman travels to Detroit, interviews the family of the suicide bomber and is able to identify him as a Hezbollah operative. Meanwhile, the Iranians continue to deny any role in the bombing, despite overwhelming evidence to the contrary.

It is a Jewish imperative to get this story known. Few Jews around the world have a full understanding of how the Islamic revolutionary regime in Teheran reached across the world to murder and terrorize Jews in the West. Few have ever heard of Alberto Nisman, a modern day Jewish hero.

Perednik’s book is only available in Spanish.  He is looking for an American publisher and a contract for a feature film. Until then, readers of Spanish here should read this book now.

Meanwhile, as a result of Nisman’s efforts, the judge originally in charge of the investigation will soon be tried for his alleged role in burying the truth.

And next year former Argentine President Carlos Menem, along with a former chief of staff of the Argentinean Intelligence, will go on trial for covering up the attack on the largest Jewish community in South America. Stay tuned.

Charles Jacobs is president of Americans for Peace and Tolerance.

1 2
Help us by sharing our message: