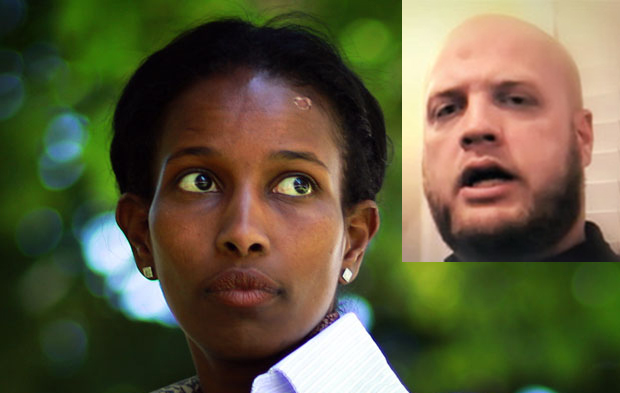 By Charles Jacobs and Ilya Feoktistov

Webb blasted out thanks to his tens of thousands of social media followers, to the Brandeis Muslim Student Alliance and to Brandeis Professor of Islam Joseph Lumbard for their activist work. He cheered: “Great job, Umma!” Umma is the Muslim community.

If you watch the videos of his sermons, you might conclude that Webb is homophobic, anti-Semitic and a misogynist, a man who claims that uncovered women are “bad people.” His mosque’s website once had instructions for men on how to beat their wives.

Ali’s brave words expose this kind of abuse of women in the Islamic world. She threatens to contest – and to expose – Islamist ideology for what it truly is. So Webb sought to have her silenced. And he succeeded.

It was almost exactly a year ago – just after Rabbi Ronne Friedman of Boston’s Temple Israel publicly endorsed his “depth, sincerity and religious scholarship” in an expression of Jewish interreligious “tolerance” — that Webb attacked Ali. He did it from the podium at the annual banquet of the Council on American- Islamic Relations (CAIR), the extremist Hamas front group that led the hateful campaign on Brandeis to snub her. Webb called Ali – a black African woman who converted away from Islam – an “idiot” and wondered: “How can she teach at the University of Phoenix, let alone Harvard?” (Ali is a fellow at Harvard University’s John F. Kennedy School of Government.) Perhaps the endorsement from the rabbi of Boston’s largest Jewish house of worship gave Webb the confidence to call a black female intellectual “stupid.” The Jews, he might well have thought, would never criticize him for it. They’ve been “Islamophobia-d,” mentally mutilated, rendered capons.

If Brandeis President Fred Lawrence lived in a world not drenched in post-modernist political correctness, he would be Ali’s most natural champion. But he is owned and ruled by that canon.

It’s a topsy-turvy world. Most Jews older than 40 don’t have a clue about the fast-flowing river of politically correct thought that runs beneath and undermines our society’s foundations of history, reason, morality and logic. They do not fully understand the mental world in which our children – and our elites — are steeped. They don’t know that the ideologies of the 1960s were the victors in the culture wars, so much so that our public schools and popular culture rehearse and extol them daily. That’s why so many were shocked that a “Jewish” and “liberal” university could publicly dishonor a black woman who fights for human rights.

Only by knowing today’s secular theology with its complex hierarchy of values could one understand how Webb, a white man, can call a black woman an idiot, question her qualifications to teach at Harvard and not be relegated to social hell.

Only threatened by the twisted idea of “Islamophobia” – that you are a racist if you object to an unreformed medieval way of life — could Lawrence publicly shame and dishonor a woman who escaped her medieval society after having been genitally mutilated, forced by her devoutly religious family into marriage, and threatened with death; and who now bravely faces down her murderous enemies. Only under PC insanity can Webb, the white son of an Oklahoma bank executive, claim greater victimhood and moral sanction from Lawrence than a brutalized but brave African woman simply because he adopted a fake accent and converted to Islam while Ali converted out of it.

Parents considering the huge tuitions that colleges now fetch are persuaded to pay through the nose in part because, yes, they deem it practical, but also because they are moved by glowing phrases about the glory and power of ideas. They have yet to understand that the ideas in power on today’s campus can turn on a black heroine and give victory to an Islamist because the president of a “Jewish,” “liberal” center of learning needs to be in line with the Islamist. It doesn’t matter that this this particular Islamist is on record claiming that Jews were Muhammad’s “greatest antagonizers” and that animosity toward the Jews is understandable.

On May 9, 2006, I met Ali in Harvard Square for breakfast. She was to speak at the Kennedy School that night. She would relate over toast and coffee that her adopted country, the Netherlands, was soon to withdraw her body guards; that the Dutch decided they could no longer protect her.

While in the Netherlands, Ali had co-produced with Vincent Van Gogh’s great-grandnephew Theo Van Gogh a film called “Submission” about the Islamic oppression of women. In response, CAIR’s fellow Islamic extremists stirred up so much violent hatred against her and Van Gogh that one of their followers decided to act. The Muslim terrorist ambushed Van Gogh in a street in broad daylight, shot him eight times, sliced his neck until his head was barely hanging on by a flap of skin, and pinned a note to his mutilated body with a knife. The note was for Ali. It read: “You’re next.” Interestingly, the recent attacks against Ali by Webb and CAIR are motivated by a new film she made about suffering Muslim women called “Honor Diaries.”

Waiting in the lobby of the Harvard Inn – she was 10 minutes late – I saw strategically placed at every possible entrance three very large, athletic blonde men whose jackets bulged with muscle (or metal). A smiling giant walked up to me, said my name, and when I confirmed, led me into a private breakfast room. I had put my hand on his back as we walked. It felt sheathed in steel. He had me sit facing away from the door.

Ali entered the room and her guards left. We spoke of her situation briefly and then turned to the business of that night’s panel, sponsored by the Dutch Student Club at Harvard, some members of which had, I had to tell Ali, gotten cold feet and begged me to have her mitigate her message about Islam.

Today, I’d have to tell her that at Brandeis much of what counts as Western civilization got cold feet and won’t stand with her. It may therefore not stand up for itself. That this happened at the hands of a Jewish president of a Jewish center of learning is extraordinarily painful.

But now comes the pushback: After the shock and dismay, people are mobilizing. I see that professors, writers and intellectuals, many of them liberals, are coming to their senses. The resultant protests and discussions will be a gauge not only of have far we have fallen, but what it will take to recover.