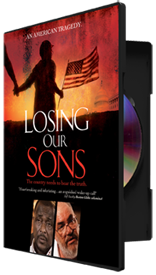 A searing true story from America’s heartland, Losing Our Sons tells of two American families whose lives intersected through a shattering act of violence. Melvin Bledsoe, a small business owner in Memphis, watched with pride as his son Carlos went to Tennessee State University in Nashville to better his life through education. Daris Long, an ex-Marine, felt honored that his son, Andy, chose to follow in his footsteps by joining the military. But when Carlos Bledsoe murdered Andy Long in Little Rock, Arkansas, both fathers are forced to confront a new kind of American nightmare. As Melvin traced the trail that led Carlos from Nashville to Yemen and then to Little Rock, Daris confronted an American government that seems to be in denial about what happened to his son. This powerful documentary provides a moment of clarity for Americans who care about their families and their country’s future.