By Ilya Feoktistov and Charles Jacobs 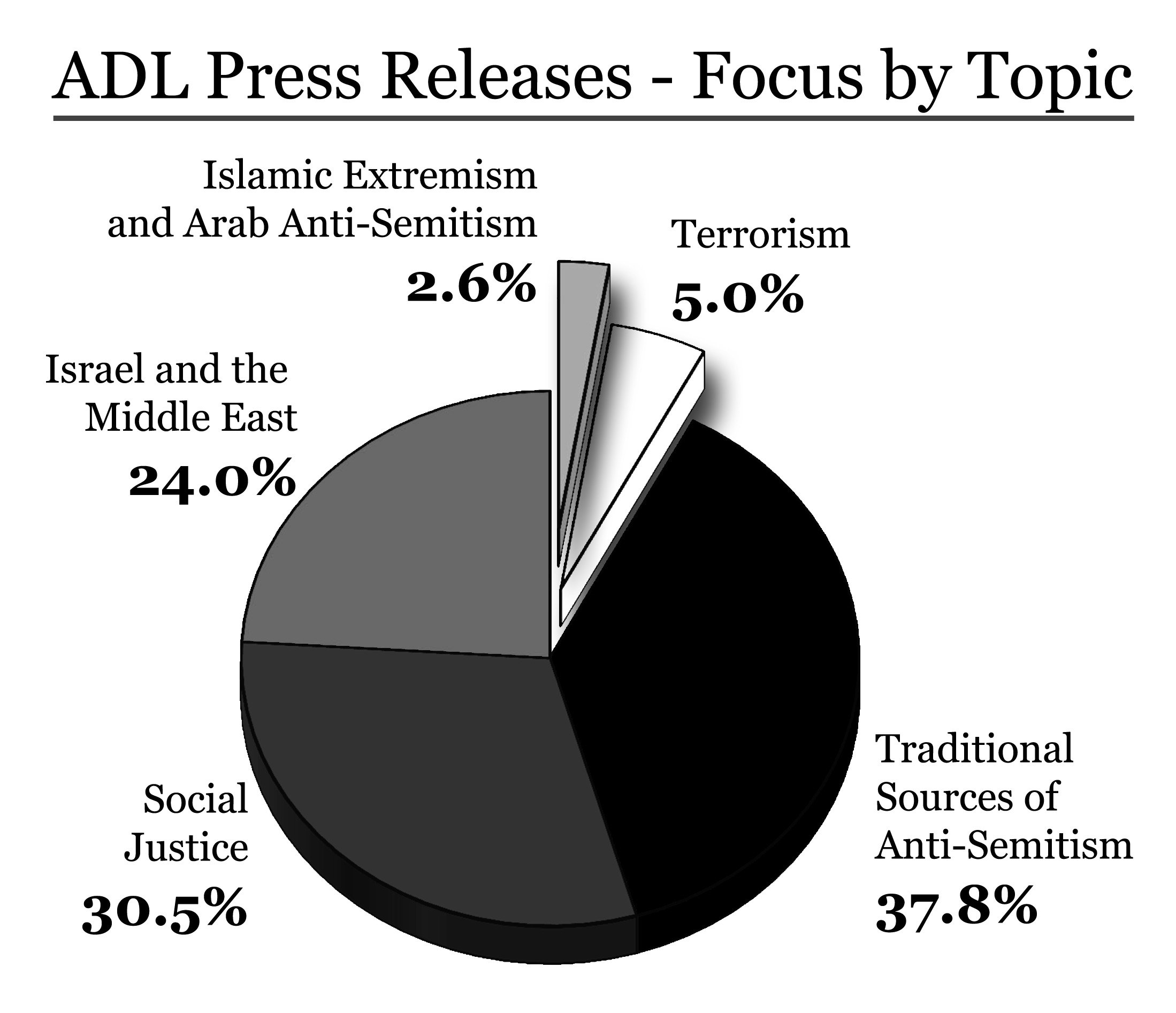 Only 7.7% of the press releases issued over the past 15 years focused on Islamic extremism (1.3%), Arab anti-Semitism (1.3%), and terrorism (5.0%).
Of the 57 press releases that were devoted specifically to Islamic extremism, most were issued in the 1990s. While a total of 22 press releases were issued in 1996, only 13 have been issued during the ten years since September 11th, 2001.
Press releases condemning traditional sources of anti-Semitism, such as Nazism and Christian theology, totaled 37.8%, those promoting “social justice” causes like civil rights totaled 30.5%, and pronouncements relating to Israel, the United Nations and the Middle East conflict totaled 24.0%
A more complete study of the ADL’s organizational focus would look at how the ADL apportions its multi-million dollar annual budget.

The Anti-Defamation League has recently been criticized for not devoting enough resources to combating radical Islam’s threat to World Jewry. Taking a qualitative look at the ADL’s website and printed material suggested to us that the ADL devotes relatively little attention to Islamic extremism in its public communications. This study sought a way to quantify the ADL’s priorities, predicting that the results will show a relatively low emphasis on Islamic extremism.

In order to most efficiently and objectively gauge the ADL’s overt focus on various topics, this study focuses on its extensive archive of press releases. This was done for several reasons.

A press release reflects an immediate focus of an organization – the issues which it most closely monitors and to which it most rapidly responds; the issues to which it calls public attention.
Press releases are by far the largest discreet data set among all of the ADL’s published material, numbering 4269 individual press releases issued over 16 years between 1995 and 2011, as of October 18, 2011.
The releases have already been divided into 25 focus categories on the ADL’s website – allowing us to analyze the ADL’s focus without the bias that creating an independent categorization scheme might cause. However, the ADL’s categorization scheme is imperfect, as discussed in the methodology section below.

The 4269 ADL press releases archived on its website were recorded by name, date, and ADL focus category. For analysis, the ADL’s press release categories were grouped into four general issue topics. The topics, grouping criteria, and the study’s limitations are described below:
Islamic extremism and terrorismIn this general category are included the press releases listed by the ADL as devoted to Islamic extremism and its consequences: international terrorism, domestic terrorism, and the propagation of Arab anti-Semitism. Reading through the latter three categories, it’s noticeable that the ADL mostly ignored the Islamic extremist roots of terrorism and theological underpinnings of Arab Jew-hatred in the press releases it issued on these topics. Also, some press releases in the terrorism categories didn’t actually focus on Islamic terrorism. These releases either condemned Jewish terrorists (Dec ’01: “ADL Applauds FBI For Arrest of JDL Leader Irv Rubin for Alleged Acts Of Terrorism”), or warned of a backlash against Muslims due to Islamic terrorism (Sep ’01: “ADL Says Americans Must Remain United, Reject Group Hatred in Aftermath of Terrorist Attacks”) Due to the relatively small number of such press releases, the terrorism categories in their entirety were included within this general topic – making the findings slightly more favorable to the ADL.
Traditional sources of anti-SemitismThis category includes press releases devoted to long-recognized types of anti-Semitism: Nazism, white supremacism, etc. Several vaguely-worded ADL categories were classed in this topic. The “Internet” category is included here because the overwhelming majority of the press releases therein focus on Neo-Nazi online activity. It should be noted that a small number of press releases in this category (e.g. Jun ’08: “ADL recognized for combating cyberbullying”) actually have nothing to do with anti-Semitism. ADL’s press releases on international anti-Semitism are included here because the overwhelming majority of these focus on traditional anti-Semitism in Central and Eastern Europe. (Although there are a few press releases focused on Arab governments as well, e.g. Mar ’98: “ADL Appalled By Egyptian Press Anti-Jewish Attack On U.S. Ambassador, Urges Mubarak To Denounce Persistent Anti-Semitism In Egyptian Media”) The Nation of Islam is included in this topic because it is not generally considered to be a true Islamic movement and is more accurately described as traditional African-American anti-Semitism.
”Social justice”Many of the ADL categories in this topic are vague: “Supreme Court,” “education,” “religious freedom,” etc. This topic was created because the vast majority of press releases in the ADL categories assigned here promote ADL positions on American politics and don’t specifically deal with Jewish defense. For example, the “Supreme Court” category contains press releases that mostly promote separation of church and state, gay rights, pro-choice politics, and gun control. (Jun ’00: “ADL Dismayed at Supreme Court Decision Allowing Boy Scouts to Discriminate Against Gays;” Apr ’07: “ADL Disappointed With Supreme Court Ruling On Partial Birth Abortion Act;” Jun ’08: “ADL Disappointed In Supreme Court Decision On Gun Rights”) One press release in the category urges the Supreme Court to extend civil protections to Guantanamo Bay detainees. (Aug ’07: “ADL Urges Supreme Court To Preserve Due Process Rights Of Guantanamo Bay Detainees”) The “education” category, while infrequently including Jewish-related press releases (e.g. Feb ’09: “As Colleges Face Renewed Anti-Israel Activism, ADL Provides Students with Tools to Fight Back,”), most often focused on other issues. (E.g. Feb ’05: “Miami-Dade Newborn Centers Get Free “All Kinds Of…” Diversity Board Books;” and Dec ’09: “ADL Recommends New Anti-Bullying Report.”)
Israel, the Middle East, and the United Nations. The ADL’s “Israel and the Middle East” category comprises by far the largest fraction of its press releases. It was grouped together with the ADL’s “United Nations” category because most of the press releases there focus on Israel’s relationship with the UN. The “Israel and the Middle East” category is a complicated one that was looked at in detail because the ADL might have classified some Islamic extremism-related press releases here. In fact, this potential error was negligible, but a large portion of the releases was found to be devoted to condemnation of “Jewish extremists” and promotion of leftist politics. This is discussed in the Findings below. 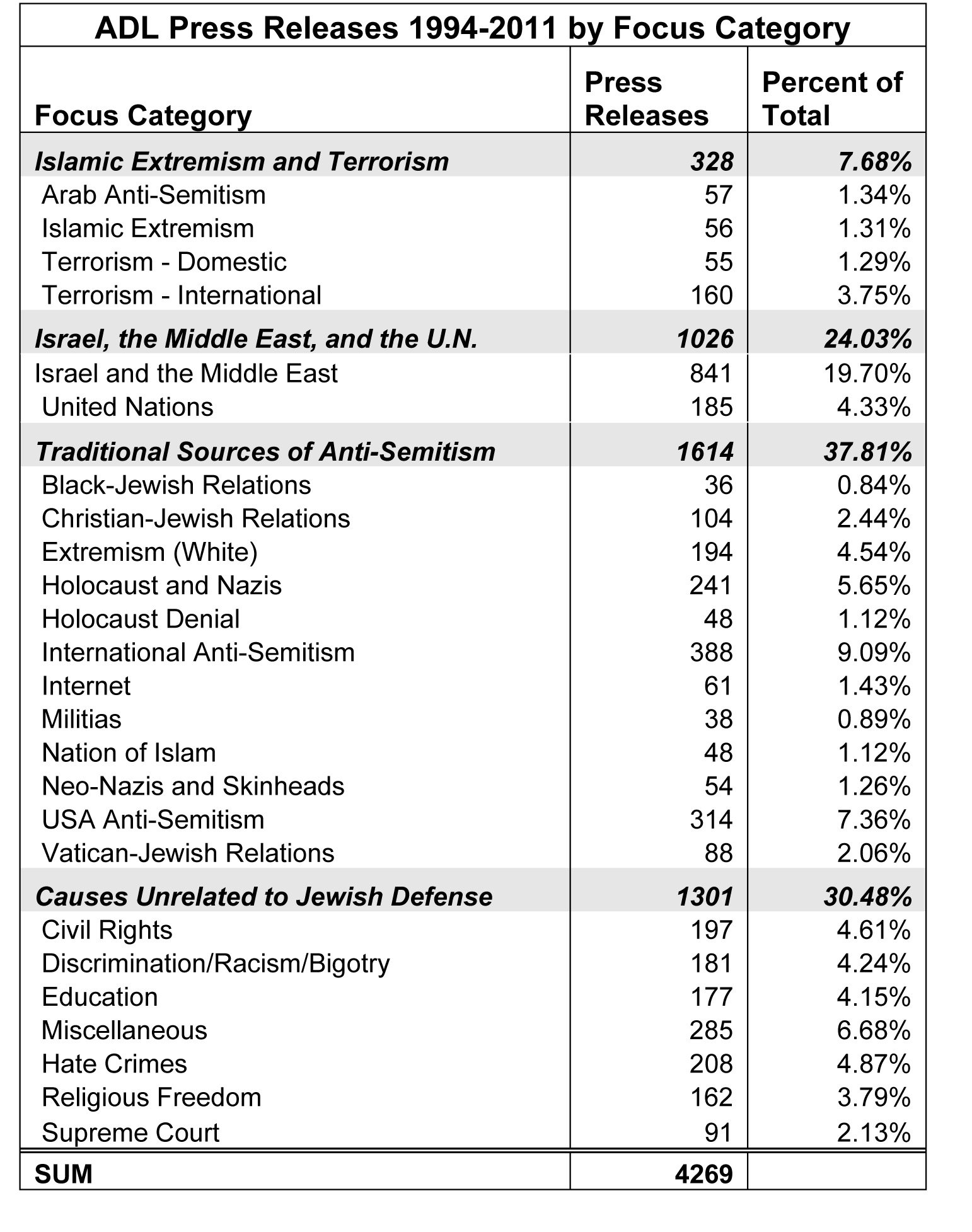 Based on an empirical analysis of the ADL’s press releases focused on Islamic extremism, it appears that:

Also interesting were the results that came from analyzing the largest ADL focus category – a fifth of total press releases issued – on Israel and the Middle East. This category was originally given a closer look out of concern that the ADL might have grouped many press releases that were actually related to Islamic extremism into the Israel and Middle East category instead. Considering the large number of press releases in this group, such miscategorization could create a significant error in our analysis. However, among the 841 press releases in this category, only three were found to be relevant to Islamic extremism (Jan ’01: “ADL Calls on PA and Islamic Leaders to Condemn Perversion of Religious Symbols;”Apr ’01: “ADL denounces claim by Muslim leaders that Pokeman game is “Jewish Conspiracy;”” Nov ’01: “ADL Says Anti-Semitic and Anti-American Reports in Arab and Muslim Media “Foment Anger And Hate.””) 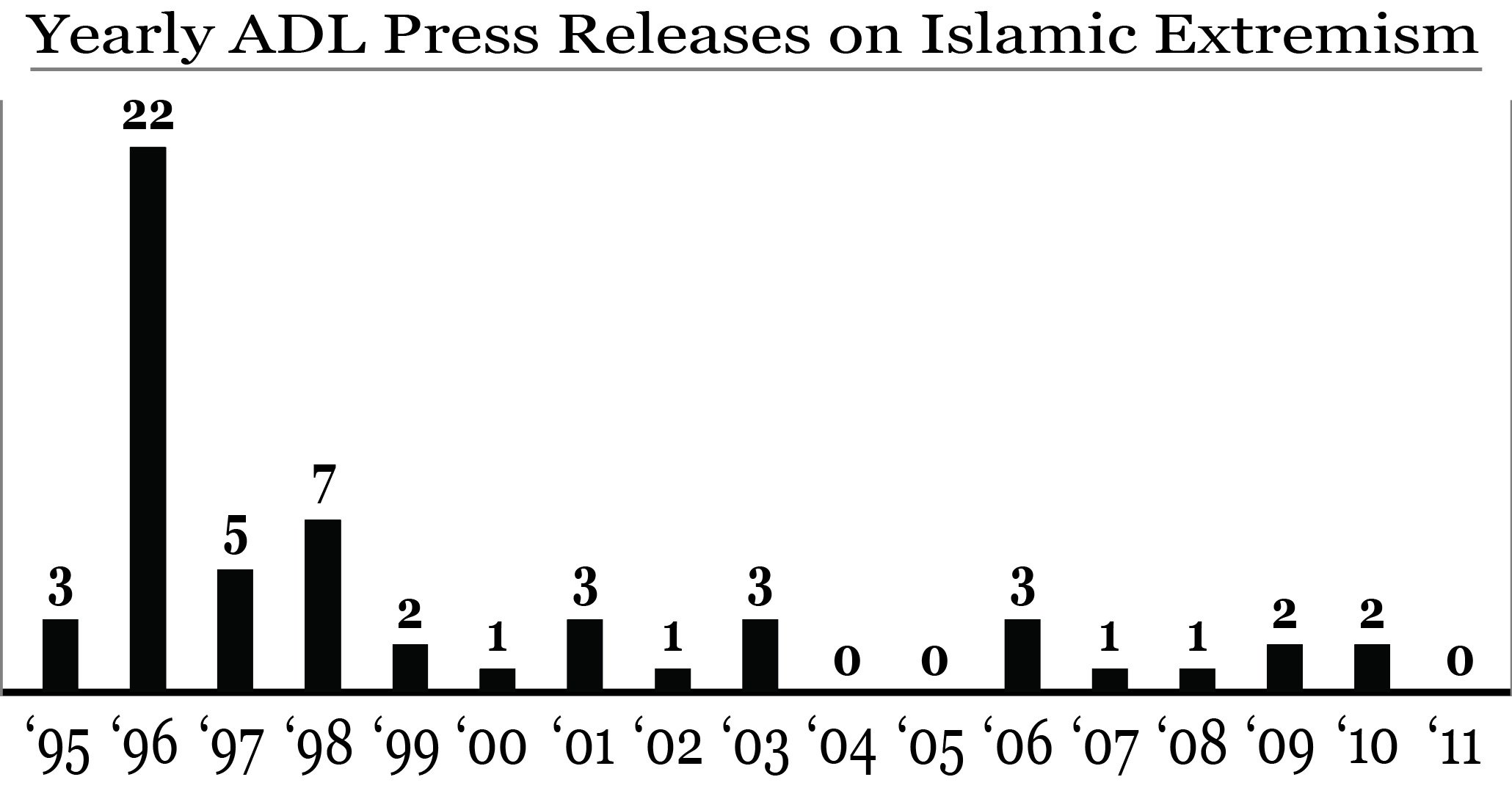 While claiming that it sees Islamic extremism as the biggest threat to World Jewry, ADL addressed that threat, along with terrorism and Arab anti-Semitism, in only 7.7% of its press releases. This consititutes an incredibly tiny focus on what Abraham Foxman has insisted is, “the highest priority for ADL.” 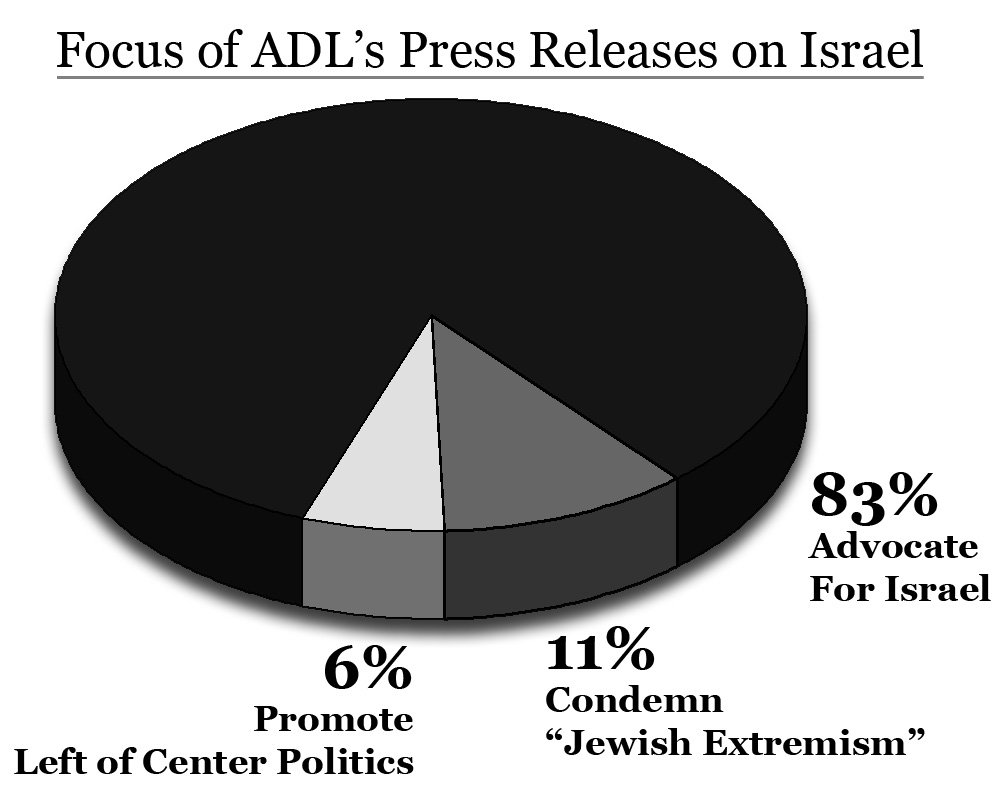 Surprisingly, even as Jewish safety is increasingly deteriorating around the globe, a large chunk of the ADL’s press release activity is apparently focused on “social justice” political issues like abortion, gun control, and due process rights for Guantanamo detainees. It is also noteworthy that so much of the ADL’s organizational focus on Israel has been diverted to promoting left-of-center causes.

This study was a revealing, if incomplete and imperfect measure of the ADL’s focus. In the near future the research will be expanded to other quantifiable measures of organizational focus that the ADL makes publicly available – op-eds, educational seminars, etc. These are smaller and therefore less rigorous data sets, but they should be examined to determine whether the patterns exhibited by the press release data hold across other ADL publications.

Because of the problems with the ADL’s organization scheme described in the study limitations section, the same biases that invoke criticism of the ADL also cloud its categories. Removing the errors associated with this would require a more thorough effort of grouping the press releases one by one.

A historical and qualitative look at the ADL’s approach to confronting Islamic extremism should also be undertaken. For example, real progress against Christian anti-Semitism was achieved in great part through analysis and discussion of Christian holy texts. However, the ADL seems to exclude from its efforts any examination of Islamic canon and of the historical religious oppression of Jews as dhimmis in the Islamic world. This issue deserves a closer look.

Of course, a thorough study of the ADL’s organizational focus would examine its budget. Considering the concerns presented in this study, the ADL’s donors should urge the organization to make public exactly how it has been apportioning its multi-million dollar annual budget.